Willie Mabon (24 October 1925, Memphis, Tennessee – 19 April 1985, Paris, France) was an American R&B singer, songwriter and pianist. Born Willie James Mabon, and brought up in Memphis, he had become known as a singer and pianist by the time he moved to Chicago in 1942. He formed a group, the Blues Rockers, and in 1949 began recording for the Aristocrat label, and then Chess. His style contrasted with many Chess artistes – it was cool and jazzy, emphasising piano and saxophone rather than guitar and harmonica. 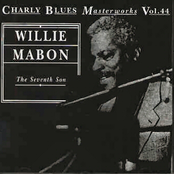