Warda Al-Jazairia (Arabic: وردة الجزائرية‎), commonly referred to as just Warda (Arabic: وردة‎, IPA: [ˈwæɾdæ]) (July 1939 - May 17, 2012) was a French-born Algerian singer. She is well known for her Egyptian songs and music. She died on May 17, 2012 in Cairo. Warda was born in Puteaux, France to a Lebanese Mother and Algerian father. She started singing at the age of eleven in 1951. She quickly became well known for her singing of patriotic Algerian songs. 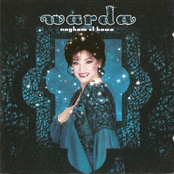