Travis Michael Garland is a singer-songwriter from Lubbock, Texas who started his music career as a member of the boy band NLT . They were discovered by record producer Chris Stokes and signed to his TUG Entertainment-label in 2006. The following year NLT toured with the The Pussycat Dolls, and recorded a single with Timbaland . However, in 2009 the band split up before ever releasing an album. Garland went solo and was discovered online by the blogger and TV personality Perez Hilton 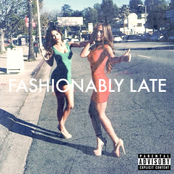