Ebba Tove Elsa Nilsson, known professionally as Tove Lo, is a Swedish singer and songwriter, who has been called "Sweden's darkest pop export" by Rolling Stone. She is known for her raw, grunge-influenced take on pop music. Her honest, complex and autobiographical lyrical content has led to her being dubbed "the saddest girl in Sweden". Raised in the Djursholm district of Danderyd, Lo is an alumna of the music school Rytmus Musikergymnasiet. She formed the rock band Tremblebee in 2006.

Queen of the Clouds 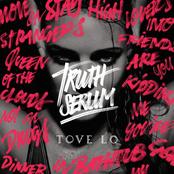