Corey Michael Mixter, better known as Titanic Sinclair, is an American singer-songwriter, producer, photographer and director. He is most known for formerly being a part of the band Mars Argo, and for being a previous creative collaborator of American singer Poppy. Sinclair was born in February 1987. During college, he and his friends would make comedy videos on the websites iFunny, DigitalFunTown and FirstHourMovies. He met Mars Argo on Myspace in early 2007, and the two later began dating and eventually started the band Mars Argo in 2008. 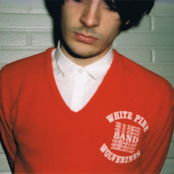