Blues Rock Soul from Germany ! Timo Gross has been living in Heidelberg for about twenty years.He lately has moved to a small village close to the French border to raise his family and find some quietness, when he's off the road. He got into music, back in the late Seventies, after watching a documentary about the history of modern music on German TV. He saw a backstage interview with Clapton, where he improvised some little Blueslines, and he got hooked. The same year he started playing Gigs and hasn't stopped since. 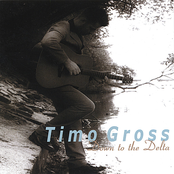 Down to the Delta

Juke and The Blue Joint