This Train is a rock band, formed in 1993 in Chicago, Illinois by bassist Mark Robertson, and Guitarist Jordan Richter. After other drummers came and went, the pair added Cobra Joe in time for their first "official" release, Your Soaking In It!. Robertson had previously been a member of the bands The Altar Boys, Brighton and Allies. The band quickly became known for their quirky Alternative/Rockabilly/Punkabilly/Cowpunk style of music (which they called Cowpunkabilly) and their equally quirky lyrics.

Mimes Of The Old West

You're Soaking In It 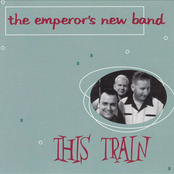