The Vaughan Brothers is a collaboration of Stevie Ray Vaughan and older brother Jimmie Vaughan. A one time thing at the time that could've gone to more albums, but SRV's unexpected death dashed all hopes of making another album with his brother. The album "Family Style" was recorded in 1990, and was released just after SRV's death, but there will always be double trouble in our lives. Sibling blues guitarists Jimmie Vaughan (born in 1951) and Stevie Ray Vaughan (1954-1990) were born and raised in Dallas, TX. 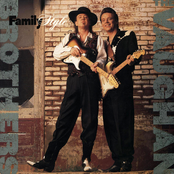