The Shires, who formed in 2013, are a UK country pop duo composed of singer-songwriters Ben Earle and Crissie Rhodes. They hail from Hertfordshire and Bedfordshire. Ben sings vocals and plays guitar and Bedford native Crissie Rhodes shares lead vocals. The duo fittingly took the band name in order to maintain an English identity and take a small part of England back to America. "Shire" is the original term for what is usually now known as a county in the United Kingdom. 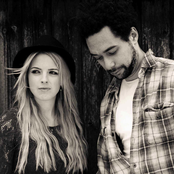