The Lapse was an American indie band formed in late 1997. The band was first signed to Gern Blandsten, then Southern Records. The Lapse was the duo of then boyfriend/girlfriend Chris Leo (ex-Native nod) and Toko Yasuda (Enon, ex-Blonde Redhead). They formed The Lapse after the break up of their previous band, The Van Pelt. The Lapse had Leo on guitar and Yasuda on bass with both handling vocals. The Lapse formally disbanded in 2001, with Yasuda leaving to join Enon. 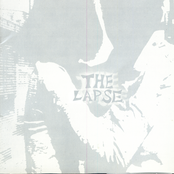 The Party of Helicopters