The High Numbers was a short-lived alternate name used by The Who at the outset of their career. The name change occurred at the behest of music publicist Peter Meaden, who wanted to make them known as a mod band. "High numbers" was a reference to T-shirts with number designs, a coveted mod fashion item at the time. The band consisted of the same line-up as The Who: Roger Daltrey (vocals), Pete Townshend (guitar), John Entwistle (bass), and Keith Moon (drums). After their first single failed to chart, they reverted to The Who. 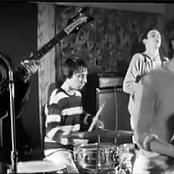