Formed in Melbourne, Australia in 1997, Tenpenny Joke have built a huge following after years of stellar live performances and successful independent releases. Their music has been featured as the soundtrack to various surf/skate DVDs and is aired regularly on Australian radio, while their music videos 'She', 'Sirens', 'Even Harbour' & 'Sense' have frequently been seen on Australian TV. In 2005 the band released their debut album, 'Ambush On All Sides. 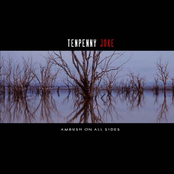 Ambush On All Sides

Paul Lisak & After The Ice