There are mutiple band's named 'Talk Show': 1. Post-punk band from South East London, formed in 2018. 2. A side project of American rock band Stone Temple Pilots. After singer Scott Weiland was arrested on drug charges, the other band members (Robert and Dean Deleo and Eric Kretz) decided to team up with singer Dave Coutts to form a side project called Talk Show. The band's only (self-titled) album failed commercially and turned out to be their only effort. 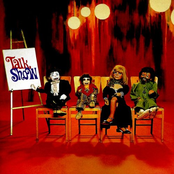