Soliman Gamil (سليمان جميل ,1994-1924) was an Egyptian musicologist, composer, and musician. Gamil was born in Alexandria, Egypt, on 24th December 1924. In 1963 he began to experiment with traditional Egyptian musical instruments in his compositions for films and theatre, in an effort to evoke the sounds of Ancient Egypt. Gamil died on 13th June 1994. 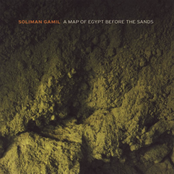 A Map Of Egypt Before The Sands

The Musicians Of The Nile