Small Town Pistols is a Canadian country music duo composed of Amanda and Tyler Wilkinson, formerly of The Wilkinsons. Their self-titled debut album was released by 604 Records on February 19, 2013. Its second single, "Living on the Outside," debuted on the Canadian Hot 100 in January 2013. 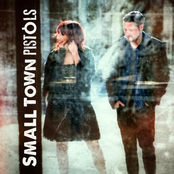