Sister Souljah (born as Lisa Williamson in 1964, Bronx, New York) is an American hip hop-generation author, activist, recording artist, and film producer. She is best known for Bill Clinton's criticism of her remarks about race in the United States during the 1992 presidential campaign. Clinton's well-known repudiation of her comments led to what is now known in politics as a Sister Souljah moment. She appeared on several tracks as a featured guest with the hip-hop group Public Enemy 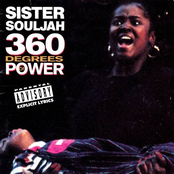