After helping form The Dayton Family with Bootleg, Shoestring played a primary role in the group's quick success within the Midwestern hardcore rap underground. Unfortunately, the group's quick success came to an end following their second album, F.B.I., when the group encountered numerous problems with the law. Despite these obstacles, Shoestring went on to sign with Tommy Boy and released his solo debut, Representin' Till the World Ends, in 1999. 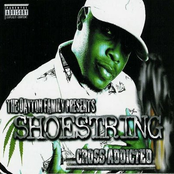 Representin' Til the Word Ends