Shelly West (born May 23, 1958, Cleveland, Ohio) is an American country music singer. Her mother was the country music star Dottie West, whose career spanned three decades. Shelly West is best known for having hit duets with David Frizzell, and for their #1 hit "You're the Reason God Made Oklahoma". She also was a successful solo artist, having her own #1 hit, "Jose Cuervo" in 1983.Early life Shelly West was born in Cleveland, Ohio in 1958 to Dottie and Bill West. 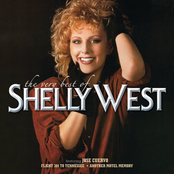 The Very Best Of Shelly West