An alternative-rock band, consisting of Sammy-Lee Tomlinson, Jim Lee, and Terry Abbott (formerly of Vex Red). Their E.P. "Rule 3 - Conceal Your Intentions" was released on 12 April, 2004, with their label, Sugar Shack Records. The E.P. met with positive reviews from the music press. Their track "I am Weightless" was featured on the soundtrack for the game "Need For Speed Underground 2". 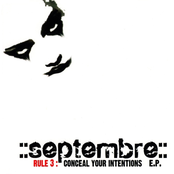