Sarah Buxton grew up in Lawrence, Kan., and became actively involved in music as a child by learning piano, playing flute and joining a children's choir. She sang Patty Loveless' "Blame It on Your Heart" at a talent show as a junior in high school. As she learned more about music, she became interested in songwriters and began writing poetry. After graduation, she met one of her musical idols, Stevie Nicks, who encouraged her to pursue music, which meant a move to Nashville. 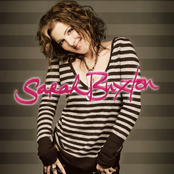