Sandy Rogers, real name Sandra Amy Rogers, is a country musician know for "Fool For Love" which featured in the 1986 movie of the same name. The song also found its way on the soundtrack for the Quentin Tarrantino movie Reservoir Dogs but wasn't heard in the movie itself. The song was featured again in 1996 for the movie Somebody Up There Likes Me. She is the sister of American actor and playwright Sam Shepard. 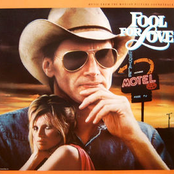