Sakis Rouvas (Greek: Σάκης Ρουβάς; born on 5 January 1972 in Mandoukion, Corfu, Greece) is a Greek musician, television and film artist, businessman, and former pole vaulter who is one of the most successful and influential entertainers of all time in Greece and Cyprus. Beginning a career as a member of the national athletics team, Rouvas commenced a musical career in 1991 and became one of Greece's first pop performers; widely recognized as the genre's main performers to this day 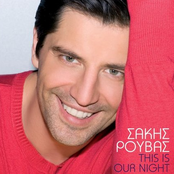 This Is Our Night