Sabah (Arabic: صباح‎; born Jeanette Gergis Al-Feghali, 10 November 1927 – 26 November 2014) was a Lebanese singer and actress. Considered a "Diva of Music" in the Arab World, (the same title often given to Oum Kalthoum, Warda Al-Jazairia and Fairuz), she has released over 50 albums and has acted in 98 movies as well as over 20 stage plays. She has a reported 3,500 songs in her repertoire. She was the first Arabic singer to perform at Olympia in Paris 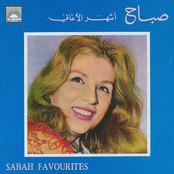