There are more than one musicians that go by the name Randy Scott. I. Randy Scott is a professional musician, record producer and composer. His 4th CD entitled, "Breathe" remained in the top 40 nationally for five months, and is available through most major retailers and record stores internationally, as well as online through iTunes and Amazon.com. In 2008, Randy produced four songs on Vickie Winans' CD, "Woman To Woman". He also worked on her recent single, "How I Got Over", which debuted at #1 on Billboard. 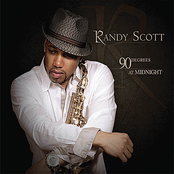