Ramy Essam (Arabic: رامى عصام‎‎, pronounced [ˈɾɑːmi ʕeˈsˤɑːm]; born 1987) is an Egyptian musician.[1] He is best known for his appearances in Tahrir Square in Cairo during the Egyptian Revolution of 2011. Essam was born in 1987 in Mansoura, Egypt.[2] His song Irhal, in which then Egyptian president Hosni Mubarak was urged to resign, gained great popularity among the demonstrators. It became internationally known through YouTube, and is referred to as the anthem of the revolution. 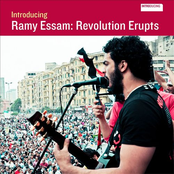