Quinten van den Berg (born September 21, 1985), better known by his stage name Quintino, is a Dutch DJ and record producer. His music is mostly electro house. His most popular songs include his remix of "Rap das Armas', 'Selecta', 'Go Hard' and 'Fatality'. In 2014 he was named No. 86 in the Top 100 DJs list put out by the DJ Magazine. Music career Quintino explored a wide variety of artists and music, before he got behind the turntables. Once he finished school 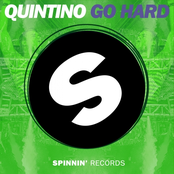