One More Girl is a Canadian country music duo composed of actor-singers Carly McKillip and Britt McKillip, who are sisters. They signed to EMI Canada in 2008 and released their debut single "I Can Love Anyone" that year. It debuted at #42 on the Radio & Records country singles charts in Canada in December 2008. Their debut album, Big Sky, was released in Canada on October 6, 2009. They have released four singles from the album: "I Can Love Anyone", "Misery Loves Company", "When It Ain't Raining" and "Tumblin' Tears". 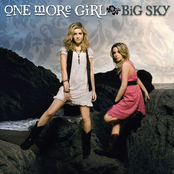