There are two artists with this name: 1. OFFONOFF is a south korean duo consisting of singer-songwriter Colde and producer 0channel signed under YG's sub-label HIGHGRND and also part of the underground hip-hop crew Club Eskimo. 2. Offonoff is Paal Nilssen-Love (The Thing, Atomic), Massimo Pupillo (ZU) and Terrie Ex from The Ex. They released their debut Clash on Smalltown Superjazzz in 2008. 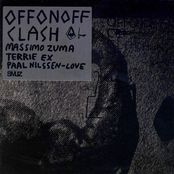