All old school friends from Waterford, who grew up playing together in various bands and discovering the records they collectively grew to love, O Emperor emerged with debut long-player Hither Thither in 2010. A record of immense depth and far-reaching confidence, it was received with lavish praise from fans and critics alike, earning the band a Choice Music Nomination (Irish album of the year). Since then, the band have shared the stage with the likes of MGMT 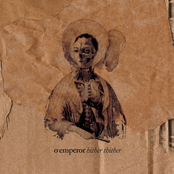