When Australian singer/songwriter Morgan Evans released his self-titled debut album in 2014, it was the culmination of a musical journey that began when he started his first band at the age of thirteen. It’s a journey that has seen the country-rocker tour with superstars like Taylor Swift and Alan Jackson, play to over 50,000 people in Nashville at the world’s biggest country music festival and build a large, devoted following as he’s played the length and breadth of his native land and across the USA. 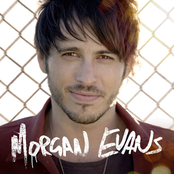