Mexicolas were a rock band from Birmingham, England, formed by Jamie Evans in 2006 and signed to Midlands based In Exile Records. Mexicolas were featured in a documentary series for Channel 4 entitled '4-Play'. The documentary followed the band in their Digbeth warehouse where they recorded and lived together. After a successful beginning to 2007, The band were snapped up by booking agents CAA (Creative Artist Agency) who have been keeping them busy on road ever since. 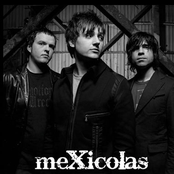