Maya Hussam Asmar or better known by her stage name, Maya Nasri (Arabic: مايا نصري) is a popular Lebanese singer. She has gained attention and popularity by the release of her album Rooh (Go). The album's single of the same name was considered a success. The music video was directed by Emile Saleeyati. Rouh was filmed in an abandoned apartment in Al Ahsrafieh, Beirut, is dreary and shows the agony of a woman who is suffering from the desertion of her lover. The song was charted strongly throughout the Arab World. 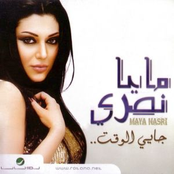