Marie Knight (June 1, 1925 – August 30, 2009) was an American gospel and R&B singer. She was born Marie Roach in Sanford, Florida but grew up in Newark, New Jersey. Her father was a construction worker and the family were members of the Church of God in Christ. She first toured as a singer in 1939 with Frances Robinson, an evangelist. She married preacher Albert Knight in 1941; they were later divorced. In 1946, she made her first recordings, for Signature Records, as a member of The Sunset Four. 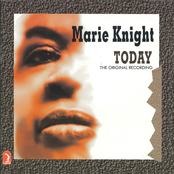