Madison Elle Beer (born March 5, 1999 in Jericho, New York, USA) is an American singer. She is currently signed to Epic Records. Beer began posting videos on YouTube of her singing covers of popular songs in early 2012. They gained the attention of Justin Bieber, who tweeted a link to her cover of Etta James' "At Last" to his followers. This caused Beer to trend worldwide on Twitter and gain substantial media coverage. Bieber signed Beer personally to the record label to which he is signed 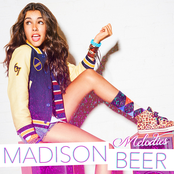