LoCASH COWBOYS It was April of 2008, and the LoCash Cowboys were doing what they do best—rocking a packed house. They were at Nashville's Wildhorse Saloon, where the two of them—Preston Brust and Chris Lucas—had met a few years earlier. The amped-up crowd was living, screaming proof that they had put the time since then to good use. They had been criss-crossing the country, honing their craft on stages large and small, developing one of the most dynamic live shows in any genre of music. 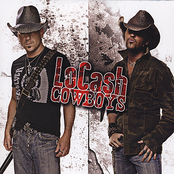