Lil Johnson (dates and places of birth and death unknown) was an African American singer who recorded bawdy blues and hokum songs in the 1920s and 1930s. Her origins and early life are not known. She first recorded in Chicago in 1929, accompanied by pianists Montana Taylor and Charles Avery on five songs including "Rock That Thing". She did not return to the recording studio until 1935, when her more risqué songs included "Get 'Em From The Peanut Man (Hot Nuts)" 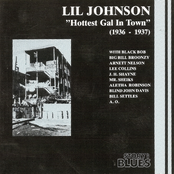