Leland Martin (born February 20, 1957, Success, Missouri) is an American country singer. Martin was one of nine children; his grandmother and father were both country singers. He held jobs as a truck driver, house painter, and in a sawmill before signing with Rival Records, who issued his debut album in 1998. Follow-up albums appeared in 2002, 2005, and 2008. Website: http://www.lelandmartin.com/index.html 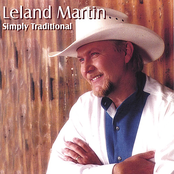