Corey 'Latif' Williams is a US based RnB artist, once signed to Mowtown Records under simply 'Latif'. His debut album 'Love In The First' was released in 2003, with one single to support it 'I Dont Wanna Hurt You'. At present, Corey is being mentored by Teddy Pendergrass and is in close working proximity with Next Selection's Ryan Leslie, of whom appears on the thumping track 'U Think U Know'. Latif is currently in the studio working on his sophomore effort, as yet untitled. 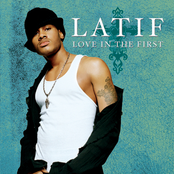 Love in the First