This highly energetic band comes from Bavaria, but from its world-rooted metropolis Munich. Kytes is mixing fresh electro funk with daring modern rock. The result is pretty catchy, cheerful and intelligent too. The four friends even made it to a Vodafone campaign, often a ticket to greater things, as we know. For now they have released the stunning EP "On The Run". At times the five songs sound like the sophisticated rock of French band Phoenix, but also convert into the snappy rhythm of the British ska tradition. 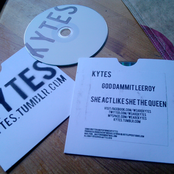