Koffee Brown were a neo-soul duo consisting of male singer Fonz and female singer Vee, best known for their 2001 song "After Party" off their album Mars/Venus. The two were put together as a duo upon the suggestion of industry veteran Clive Davis, but apart from "After Party", hit #44 on the Billboard Hot 100 and #10 on the Billboard US R&B charts, their second single, "Weekend Thing", only appeared on the R&B charts at a lowly #71, failing to chart altogether on the Hot 100, and no follow-up to Mars/Venus has ever been released. 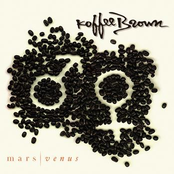