Ketty Lester (16 August 1934 - ) is an American singer and television actress who is probably best recalled for her 1962 hit single "Love Letters" which reached into the Top 5 of the music charts in both the United States and the United Kingdom. Born Revoyda Friederson in Hope, Arkansas, Lester began her singing career after studying music at San Francisco State College and performing in the city's Purple Onion club in the early 1950s. Later she would join Cab Calloway's orchestra on a European tour. 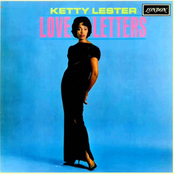