Kero Kero Bonito are a British band from London, England. The band consists of vocalist Sarah Bonito, producer Gus Lobban, and producer Jamie Bulled. Their name comes from the Japanese onomatopoeic words for frog croaks and a type of fish. Gus and Jamie grew up in the suburbs south of London and went to school together. In search for a new band member, they posted advertisements, including on MixB, an online bulletin board for Japanese expatriates, largely due to their interest in Japanese rap. 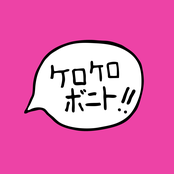