A country-pop singer and songwriter out of Knoxville, Tennessee, Kelsea Ballerini started writing songs when she was 13 years old, began learning guitar a year later, and moved to Nashville at 15 to pursue her dream of being a professional singer and songwriter. Four years later in 2013, when she was 19, Ballerini signed a publishing deal with Black River Publishing and a recording deal with Black River Entertainment later that same year. A debut single 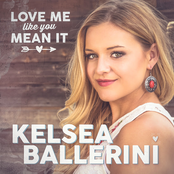