Keith Bryant is an American country music artist. In his career, he has released four independent studio albums, including one on Lofton Creek Records. He charted for the first time in 2004 with the single "Riding' with the Legend", which Bryant co-wrote as a tribute to former NASCAR driver Dale Earnhardt, who died in 2001. The song peaked at number 47 on the Hot Country Songs chart, becoming his first, and only charted single to date. Keith Bryant was born in the state of Virginia. 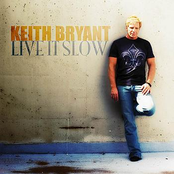 Ridin' With the Legend