Karise Eden (born 11 July 1992) is an Australian singer-songwriter, and the winner of the first series of The Voice (Australia) in 2012. She subsequently signed with Universal Music Australia and released her debut single "You Won't Let Me". It was one of the four songs recorded by Eden that entered the ARIA Singles Chart top five during the week of 25 June 2012. She became the first artist to achieve this feat since The Beatles, who held the top six positions of the chart in 1964. 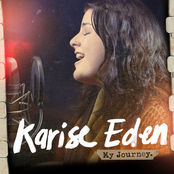