Johnny Edward Jenkins (March 5, 1939 – June 26, 2006) was a renowned left-handed blues guitarist, who helped launch the career of Otis Redding. His flamboyant style of guitar playing also influenced Jimi Hendrix, who would later use some of Jenkins's tricks in his stage show. In the 1960s Jenkins was the leader of a band called the Pinetoppers, he employed a young singer called Otis Redding as his chauffeur and singer for the Pinetoppers. During a recording session in 1962 organized by the band's manager Phil Walden 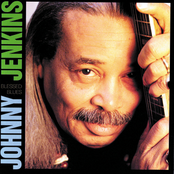