"A good song is a good song man, simple as that!" That's the mercurial and confident, but oh so endearing songwriter and vocalist Rod Black. Black knows his way around a well-written tune. He's recently finished co-writing a slew of them for his brand new band, JET BLACK STARE, and their Island Records debut album, In This Life. Back in early 2007, after becoming frustrated with his past band's creative differences, Rod found the perfect song-writing companion in fellow Vancouver, Canada resident, songwriter/producer Jeff Johnson. 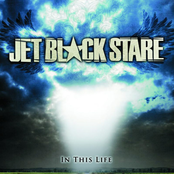