Jessica Leigh Harp, (born on 3 February 1982 in Kansas City, Missouri, United States) is an American singer-songwriter. She grew up with her parents and her sister with a love for music, singing for the first time when she was 3, writing lyrics when she was 8 and at 13 picking up her guitar. Jessica pursued a solo career in music, releasing her independent album, Preface in 2002. Then she joined up with her friend and fellow musician Michelle Branch to form The Wreckers 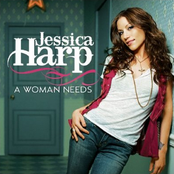