Jennifer Day Morrison (born August 22, 1979 in McAlpin, Florida) is an American country music singer. Signed to BNA Records in late 1999, she has released one studio album (2000's The Fun of Your Love) and has charted two singles on the Billboard Hot Country Singles & Tracks (now Hot Country Songs) charts. The album's title track was also featured in the 2000 film For Love of the Game. In 2005 Day reemerged on MySpace as "Jennifer Morrison" with a new solo album. 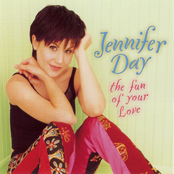 The Fun Of Your Love