Ian Clement is no stranger, as he is part of Belgian rock trio Wallace Vanborn. His solo work is something entirely different and far more intimate though – consider it to be his Dr. Jekyll contrary to the Mr. Hyde he unleashes in Wallace Vanborn. ‘Drawing Daggers’ was recorded during a six month session in the midst of the woods in the south of Belgium with producer Peter Obbels and features contributions by Karel De Backer (Novastar, Mangold) 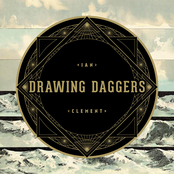